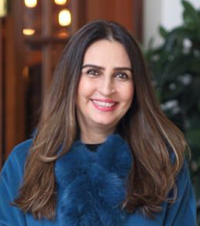 Mrs. Aamna Taseer is one of the main promoters who established First Capital Securities Corporation Limited (“FCSC”) in Pakistan in 1994, a full service brokerage house with equity participation by Smith Barney Inc USA and HG Asia Hong Kong. FCSC ser the tone for investment banking services in Pakistan and together with leading international investment banks worked on important advisory and corporate finance transactions. Since then she has been actively involved in establishing other companies in the financial sectors. Taseer’s companies have been able to attract foreign investment at times when most were shying away from Pakistan. First Capital Group has had significant investment from major international funds and high net worth individuals from abroad. Financial services companies in the group include a mutual fund, an investment management company, leading brokerage houses in Pakistan and Sri Lanka and an insurance company (joint venture with a South Africa insurance company and shaheen Foundation). In the capacity of the Director on the board of various First Capital Group companies she has been actively involved in strategic decision making by of the group companies. First Capital Group acquired the management control of Pace department store in the late nineties which was then under huge financial debt. First Capital Group was able to turn it around in short time and Pace has since become a household name in the country. With its listing in Pakistan and convertible bond listing in Singapore, Pace brand is recognized not only in Pakistan but by international fund managers as well. Toady the group has 6 operational shopping malls in different cities and around eight projects under various phases of development. These include shopping malls, apartments/gated communities, office blocks, hotels and resorts and multi use developments. Pace has partnered with Hyatt Regency to bring this prestigious international chain to Pakistan with the first project under advanced stage of construction in Lahore. First Capital Group also took the lead by introducing the first English news channel in Pakistan Business Plus which was folloed by the first exclusive kids channel, Zaiqa Channel, Media Times Limited, a First Capital Group Company is one of the Fastest growing English newspaper. the Daily Times and an Urdu daily by the name of’ Aaj Kal She is qualified as a graduate. .